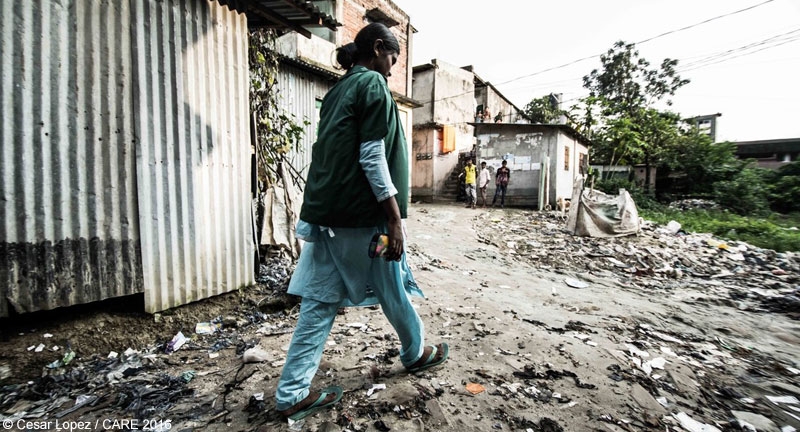 The suggested ILO Convention on ending violence and harassment at work, while positive, still has some way to go on some key issues, including the role of women in developing and implementing the Convention, who are identified as workers, what is a place of work, and the responsibilities of multinational companies.

As previously noted, CARE sees the ILO’s suggested new Convention on Ending violence and harassment against women and men in the world of work as a great opportunity to reduce the prevalence of the gender-based violence which faces the women workers around the world whom we try to support on issues of Dignified Work.

The ILO has issued a Questionnaire to solicit views regarding the Convention from States, after their consultation with workers’ representatives and businesses. The ITUC have helpfully drafted suggested answers to the ILO Questionnaire, which, happily, broadly represent our views on the Convention, and in developing our own suggested response to the Questionnaire, we have largely followed the ITUC response. However there are a limited number of areas where we believe the Convention could be strengthened beyond the ITUC’s stance.

The role of women in consultation

Since women suffer disproportionately from violence and harassment at work, it is key that women play a major role in all consultations, both in the Convention ratification process, and in the long-term implementation of the Convention in national law and regulations, and in engagement with implementation, enforcement and remediation authorities and employers.

This will require deliberate action by government, employers, trade unions and civil society to ensure that women are properly engaged, with adequate resources, in order to play a strong and meaningful role. CARE is planning to support women in Asia to engage with the ILO Convention process, and we continue our broader work to empower women workers and strengthen labour right actors, from the grassroots level up.

We are concerned that some categories of workers are insufficiently addressed by the Convention. Certainly, unpaid care workers need to be explicitly recognised as a group, and although the Questionnaire suggests that the instrument would be applicable to “the physical workplace, including public and domestic spaces where they are a place of work” (ILO Questionnaire, Q10) this category of workers have not usually been under the coverage of ILO instruments, and so need explicit recognition here.

Similarly, we believe that the definition of “workers” should include domestic workers, home-based workers, workers in family enterprises, and sex workers. The frequent stigmatisation and/or illegality of sex work increases the risk of violence and harassment, both from “clients” and from public authority workers, and reduces the possibility of remedy. Therefore special attention should be given to the situation of sex workers.

Homes should be clearly included in the understanding of the world of work in order to include critical areas of work including: unpaid care work, work in family enterprises, home-based workers and teleworkers. This then requires monitoring and enforcement to include domestic inspections in the case of domestic workers.

Public places also need to be framed as a workplace in order to protect informal workers who are especially vulnerable to violence. This should also include events related to the exercise of freedom of association, including especially the right to organise and collective bargaining. For instance, last year police fired rubber bullets that injured 10 striking garment workers who were protesting in Bangladesh against the sacking of 121 workers, and for the trebling of workers’ pay.

Political workplaces also need to be given some special attention. Too often parliaments and political parties are viewed as almost private spheres where authorities feel reluctant to intervene, and yet violence against female politicians – and the threat of it – is becoming much more common. This can be countered, for instance the UK Labour party has rules to prevent sexism, racism or bullying in meetings.

Even for those in more formal employment, there are some gaps in the Convention’s suggested coverage. The Questionnaire already recognises the need to cover travel to and from work (Question 10(c)), but it also needs to cover the immediate surrounding environment / neighbourhood / access routes to and from accommodation (eg, ensuring street lamps so it’s safe for women to walk back to their hostels at night). Similarly, work-provided/related accommodation should be within the scope of the Convention. Many workers have to live in dormitories or other employer-provided accommodation which increases the risk of violence and harassment but this is insufficiently captured by existing legislation and rules.

The Questionnaire helpfully makes a number of references to the need for awareness raising, but we believe that greater attention needs to be paid to the fact that awareness-raising campaigns should be specifically designed to reach those in informal places of work, including at home and in public places.

There is currently no recognition in the ILO Questionnaire of the United Nations Guiding Principles on Business and Human Rights (UNGP) which is both surprising and concerning, given the importance of the UNGP to establishing the responsibilities of business for identifying and mitigating risks to human rights, and ensuring remedy for breaches. Further, the UNGP themselves refer to the ILO’s Declaration on Fundamental Principles and Rights at Work. We therefore believe that the Preamble to the Convention should recall the UNGP, recognising that violence and harassment in the world of work is a human rights violation and a threat to the dignity, health and security of individuals.

In fact, nowhere does the Questionnaire address the importance of global value chains and their impact on the conditions faced by workers, not only in formal situations such as Tier 1 factories, but also throughout the value chain, including home-based and informal workers. For instance many garment value chains include sub-contracting to Tier-2 factories and to homeworkers, often via agents.

The Convention therefore should build on the UNGP’s Respect and Remedy requirements of businesses with obligations to:

Responsibility for violence and harassment in the workplace should not only extend to supply chains but should also extend to distribution and retail channels where a brand or manufacturer plays a major role in the value chain.

The above can only really be effectively implemented and monitored if we have greater transparency across the entire value chain. Employers should be required to establish violence and harassment prevention programmes with measurable objectives and should publish key (anonymised) data, disaggregated by sex, as well as reporting on risks identified and the plans established to mitigate those risks, and to provide remedy in cases of actual harassment and violence. These workplace policies need to extend to the entire value chain.

In summary, first and foremost we need a Convention, but it also needs to be one that makes a difference to all workers and in particular women, which is why we will be working hard to persuade governments, trade unions and companies to support our suggestions.

More in this category: « ICAI report on DFID’s approach to inclusive growth in Africa: Where’s the impact? Why tackling violence at work will empower more women and help deliver the SDGs »