Home // Development Blog // Reaching the Summit – a celebration, and a massive to do list – Part 2

Reaching the Summit – a celebration, and a massive to do list – Part 2 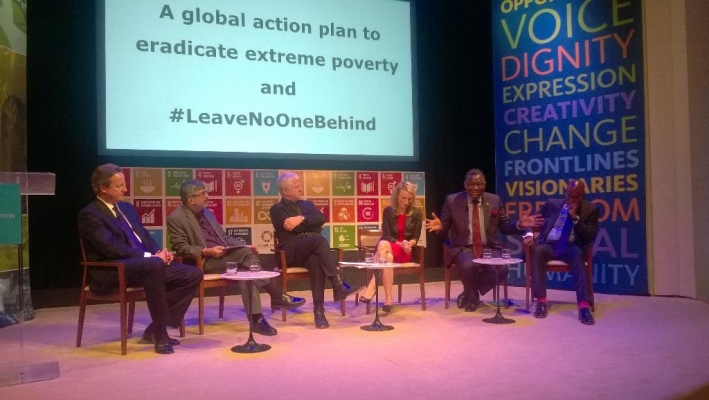 After the historic milestone that was the adoption of the goals on Day 1, Saturday was very much a day of celebration but there was also important work being done.

Over on the main lawn of Central Park, the Global Citizen festival was launching an awareness and action campaign on all 17 goals with the help of Ed Sheeran, Bono and Coldplay among others.

With so many goals (a common criticism) they focused on the first five, including goal 5 on gender equality. @LaurieLee was backstage and able to see first-hand how politicians, CEOs and rock stars out-did each other to make big announcements.

~30 mobile phone companies pledged @GlblCtzn Festival to text 1 billion people this week about the #GlobalGoals. Look out for yours

However the biggest cheers of the night went to three different but powerful women. First Beyoncé had the crowd in raptures with her high energy act, strongly themed around female empowerment. She was followed by Michelle Obama who launched a campaign on girls education focusing on the 62 million girls not in school.

The greatest rock star of the night however was Malala, who demonstrated the very personal realities for so many girls struggling to be allowed to get to school. Only fitting then that when grunge rockers Pearl Jam took the stage to close the night, they dedicated a song to her.

Meanwhile, the UK Mission to the UN joined in the mood of celebration with a playlist for the 17 goals from artists at Global Citizen.

Away from Central Park the other key events were the start of the two-day Clinton Global Initiative jamboree:

Congratulations to @impctdotco, the winner of the 2015 @HultPrize. All of the teams were terrific last night. #HP15 pic.twitter.com/lr9htNyqCU

CARE’s Tom Sessions was in a Global Compact meeting looking at the role of the private sector in delivering the SDGs:

And Gaia Gozzo continued to workshop, this time with Civicus on taking forward citizen-generated and official data:

The final day of the summit was also possibly the busiest. Behind the high level events there was a strong mood of getting down to work. Throughout the three days, Interactive Dialogues have brought together NGOs, government and donors to discuss the six biggest themes of the summit. In the dialogue on Inclusive Institutions, delegates discussed the importance of putting peace and governance into the discussion.

Powerful @Saferworld Larry Attree conflict is a cancer with no place in a healthy world. Brings a cheer & shout from NGO seats #Globalgoals

However, over on the other side of the building, it became apparent that leaders were going to be picking and choosing their SDGs to focus on, and leaving out the difficult ones focused on areas like inclusive and peaceful governance.

This clarified why it was so important on issues like gender to have it appear across the 17 goals as well as a stand-alone. This way it’s a lot harder to ignore. On this theme, UN Women hosted a summit-within-a-summit on Gender Equality, calling for a 50:50 planet by 2030.

Their summit featured many heads of state, who were starting to arrive for the normal General Assembly starting on Monday.

David Cameron got in on the act. Accompanied by John Kerry, the government of Colombia and President Ellen Johnson of Liberia, he argued that other countries had to up their game and invest in development following the British lead. Richard Curtis, who had made many of the films highlighting the goals during the last three days, joined in:

Richard Curtis calls on all governments, businesses and NGOs to measure themselves against the #Global Goals Why not? pic.twitter.com/NEkrDIldqt

That just left enough time to work out what drones could do to help out the SDGs:

Bio-carbon engineering; Susan graham from UK on how to use drones to plant trees. @SDGsolutions #GlobalGoals

So as the final session of the Summit came to an end with a speech by Barack Obama and New York prepares for the General Assembly proper, we are fully underway on the 2030 agenda. The focus has shifted to acting, measuring action and ensuring progress is made. The SDGs have their critics but they have set the to-do list for the world. We do not need to invent any new targets, we just have to deliver on what we’ve agreed.

More in this category: « Women’s rights are human rights: Marking 20 years of struggle to reduce Violence Against Women and Girls How to prepare for the unpredictable, shelter in India »