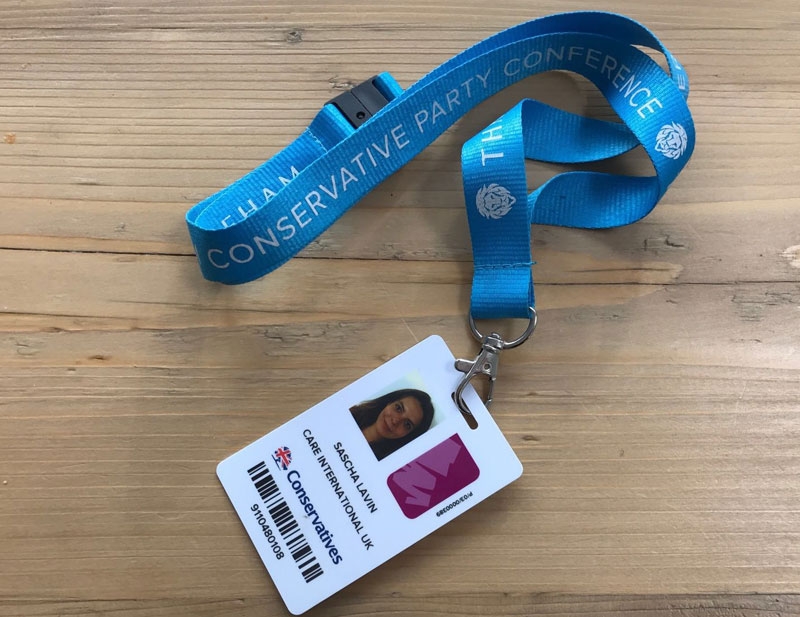 CARE’s advocacy team travelled to the party conferences this year with one goal: to build support for our #ThisIsNotWorking campaign. How many MPs could we get on board to push for a new global law to tackle workplace violence and harassment? Surely, we should only have bothered with TUC and Labour conferences if we wanted a workers’ rights issue to be met with open arms? But look a little closer and there was a decidedly receptive attitude in Birmingham to ending abuse in the world of work, as long as you knew where to look.

This shouldn’t come as such a surprise, the passing of the Modern Slavery Act showed us that the Tories understand that human suffering in complex global supply chains is something everyone needs to be taking action on. We know it’s not perfect, but the current review gives us opportunities to improve it…

Support of worker’s rights isn’t just found in Tory legislation – they have a trade union. Headed by Robert Halfon, MP for Harlow, the Conservative Trade Union is founded on the principle that workers deserve fulfilment and health across their lives.

Women MPs with the potential to make changes

Esther McVey made it clear that there was no place for harassment in politics. When John McDonnell called for the Secretary of State for Work and Pensions to be lynched, he made an advocate out of Esther. McVey spoke passionately about ending abuse within her world of work and, luckily, she is perfectly placed to do so – not just in Westminster but around the world.

McVey heads up the department that will negotiate a global treaty to tackle workplace harassment in Geneva this June. After hearing the impassioned opening remarks in her speech we hope she puts her words into action and pushes for an initiative that ensures that harassment is never part of any woman’s job description. Her Minister responsible, Alok Sharma, has made positive noises in principle.

Penny Mordaunt is another MP who is uniquely positioned to make a huge impact on ending workplace harassment. Penny has many hats, including International Development Secretary and Minister for Women and Equalities – the later headgear I imagine in a purple and green Suffragette colour scheme.

Violence and harassment is a global issue and it requires a global answer. Our research in Cambodian garment factories evidences this: in just one year, 1 in 3 garment workers in Cambodia experienced sexual harassment in the workplace.

And, as we know, workplace harassment predominately affects women. 52% of British women have been sexually harassed at work. Penny’s Cabinet positions covers both the global and the domestic aspects of our #itsnotworking campaign.

Events highlighting women in the workplace

Flipping through the little blue book that gave us the line-up for the weekend it was heartening to see so many women’s events. Groups like Women2Win and Conservative Women’s Organisation organised fringe events that were so over-subscribed there was often standing room only.

Encouraging more women to stand in elections was a focus at these events and workplace abuse was flagged as major barrier to achieving this aim. The Westminster harassment scandal splashed across the front pages what women had known for a long time: politics is an unsafe place for women. These events brainstormed ways to remedy widespread harassment with the goal of getting women better represented in local and national government.

Discussions about women in the workforce wasn’t just limited to women’s events. At a panel hosted by the Design Council, conversation around the future economy quickly morphed to a rallying call for a more diverse workforce.

Vicky Ford established a clear and coherent case for eradicating abuse in the world of work to rectify the lack of women in the workforce, especially in sectors like STEM. I had to resist the urge to stand up and cheer when she referenced the recent Women’s and Equalities report on sexual harassment in the UK.

Maria Miller, chair of the aforementioned committee spoke and chaired multiple events with current ministerial post holders like Victoria Atkins. Miller intervened articulately with her recommendations on what needs to change in the UK.

Working together to end workplace harassment

Party conferences don’t just attract MPs and activists. There’s all sorts of people who, like CARE’s advocacy team, descended on Birmingham to try to persuade those in power to back their interests. Being in the same place as all these groups is a great opportunity to keep up to date with what others are up to, especially when it relates to our goals.

The employers’ association, the CBI, had already publicly pledged their support for a strong convention to tackle workplace violence and harassment, but at conference we found out just how serious they were about creating safe workplaces for women.

Carolyn Fairbairn, CBI’s Director, told us that they are currently looking at how to inject diversity into the workforce, with a report due soon. Women in the workforce will be a focus of this enquiry and, with that, there will be an emphasis on tackling harassment.

At an event about the upcoming Economic Abuse Bill, we found out about another employers’ association that would be great to work with. The Employers’ Initiative on Domestic Abuse (END) is a network of 260 companies and public-sector organisations who are calling on employers to take action on domestic abuse.

The emphasis on the responsibility of the employer to protect their workers is something we, at CARE, have been pushing for with our #ThisIsNotWorking campaign. We, just like END, believe that the workforce should be free from violence and, in order to do so, employers need to step up.

The Tories are coming at the issue from multiple perspectives: women in politics, women in work, women in other countries accessing British aid. It’s great that different bits of the party are looking at it for different reasons. We need to meet them where they are at, not where we ideally want them to be, but for such a pervasive and universal issue to be tackled it will take something as big as a global convention. And it’s our job to continue to make the case for it.

A global convention will protect all workers, no matter where in the world they are, by ensuring that all countries have the necessary tools to implement laws and develop systems of accountability. By defining sexual harassment, the convention will also help workers and employers to identify and stop the violence.

This June, the UK Government has a golden opportunity to stand-up for workers and women around the world because this system is not working. If Britain supports establishing a new, legally binding convention to end workplace harassment, the Tories will build on the legacy they have started with modern slavery and show that the world managed to move from #metoo to #timesup under their watch.

I see my role as a bridge between those who deserve change and those who have the power to make change happen. Tackling workplace harassment through a new global convention is the focus of my position at CARE.

My previous parliamentary experience has proved invaluable for this role (although perhaps my early-morning gym sessions are worthy of more credit when it comes to chasing MPs down corridors at party conferences!). I am particularly interested in the interaction between Westminster and NGOs, what motivates parliamentarians to adopt a cause, and the spaces that encourage this.

Youthful idealism intact, my commitment to making positive change drives my career choices. For over four years, I have worked on the helpline at Manchester Rape Crisis, supporting survivors of sexual violence. I currently volunteer for Detention Action, where I visit migrants detained at Colnbrook Immigration Removal Centre.

I hold a first-class undergraduate degree in Politics with International Relations from the University of York.

Feminism without borders by C. T. Mohanty. A feature of all Gender studies reading-lists, but that doesn’t make it any less worthy. As a white, middle-class woman working for an NGO based in the Global North, this book reminds me to be aware of my privilege. Whilst advocating for women workers around the world, my role is not to speak for anyone but to amplify the many different voices of a diverse group.

The book on my bedside table: In a Day’s Work by Bernice Yeung. No prizes for guessing why I am currently reading this timely expose on the endemic workplace violence and harassment in America, shining a light on those most marginalised and informal workers.

More in this category: « What follows today’s Safeguarding Summit? Ways forward on gender and safeguarding in humanitarian action Yemen: as the International Development Select Committee gathers, the voices of women and girls must not be dismissed »