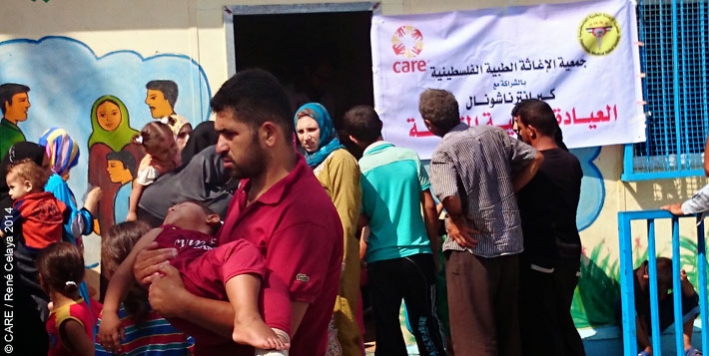 Currently an average of only 0.2% of global humanitarian aid goes directly to local or national NGOs and civil society organisations. Multiple studies have shown that local capacity is often significantly underutilised, undervalued and overlooked by larger international organisations.

CARE’s ability to be one of the first and most efficient NGOs to respond to a disaster is largely due to our long history of working with trusted local partners. There is huge scope right now to grow and to improve national and local response capacity, which often means reaching affected communities with more appropriate assistance, faster. It’s also a critical part of building local resilience and preparedness capacity before a disaster or conflict strikes.

At the World Humanitarian Summit next week, one of CARE’s commitments is to ensure that, by May 2018, at least 20% of our global humanitarian funding will go to local NGOs across the countries where we are working.

One of those local partners is the Palestinian Medical Relief Society (PMRS), founded by Dr Mustafa Barghouthi, in the 1970s, with some of his fellow medical graduates.

Responding after the 2014 conflict

CARE has partnered with PMRS for many years. Most recently, we worked with them, with DFID support, to provide mobile health clinics in Gaza during and after the 2014 conflict. Together, we set up mobile health clinics to visit schools and other places where people had sought shelter after being forced to flee their homes.

They also visited families who were unable to get to hospital, managing to see an average of 300 patients per day. The mobile health teams consisted of two general practitioner doctors, one psychosocial worker, three community health workers or nurses, one physiotherapist and one women's health doctor.

I asked Dr Barghouthi about what it was like to work with international NGOs as partners. He explained that they have already received some of their funding directly from donors like DFID, Sweden, Iceland and Luxembourg. And they received a lot of donations in kind and volunteers from the West Bank to help Gaza during the 2014 conflict. They also work with some international NGOs.

A message for the World Humanitarian Summit

The World Humanitarian Summit objective – for donors to pledge that 20% of their funding will go directly to national and local organisations – is a modest start. We can all go further beyond a financial target to work together with local civil society like real partners, developing strategies and making decisions together.

As international NGOs it’s still vital for us to be able to deliver services and being international means we can support existing local capacity with complementary knowledge, skills and resources whenever an emergency breaks. But it is important to continue to listen to local leaders like Dr Barghouthi.

He says it’s not either direct funding or partnership with international NGOs. A mixture of both can be best.

More in this category: « No women, no peace: Why the proposed SDG Peace Goal must not ignore gender Corporate Social Responsibility: What is the future of CSR? »