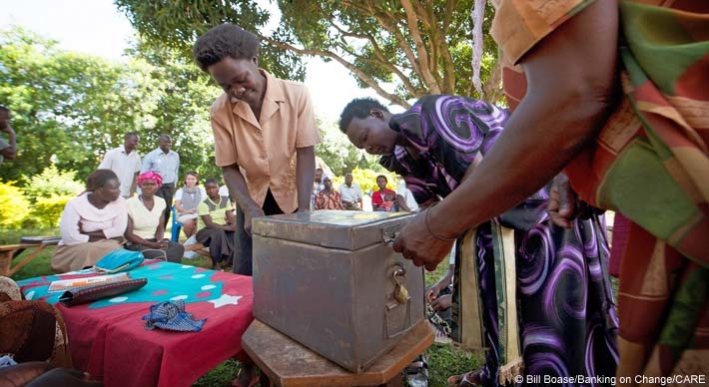 Members of the Yesu Amala VSLA group open the group’s shared safe during a meeting of the group’s members in Busia District, Eastern Uganda

The global negotiations to agree a set of Sustainable Development Goals (SDGs) to eradicate global poverty by 2030 will come to a conclusion this September. Many supporters of women’s economic empowerment have backed a petition urging governments to ensure women’s access to financial services is included, so what are the chances?

Let’s start with a quick recap of the process. Back in 2000 governments agreed to create the Millennium Development Goals (MDGs) – eight global targets to reduce poverty, reduce maternal mortality, increase access to primary education, etc, which have seen impressive results – albeit they are unlikely to be fully realised across all countries by this year.

Back then, there was not a single reference to access to finance or its relationship to women’s economic empowerment, and the role of the private sector in development was merely an after-thought.

The MDGs expire in 2015. So, in 2012, a ‘High level Panel’ chaired by Prime Ministers David Cameron (UK), Ellen Johnson Sirleaf (Liberia) and Yudhoyono (Indonesia) drafted a report proposing that the new goals be ambitious, universal (ie apply to all countries not just the poorest) and take into account the effects of climate change. This report did cite the importance of access to finance and a ‘stand-alone’ gender goal.

Then a ‘UN working group’ chaired by Kenya and Hungary got to work on crafting a draft set of new proposed goals. By the end of 2014 they had secured international consensus around 17 new ‘Sustainable Development Goals’ (SDGs) and a whopping 169 targets and indicators.

This time we saw strong reference to the importance of access to finance under three different goals on (1) poverty reduction, (5) gender equality (hurrah) and (8) inclusive growth.

The Secretary General of the UN then compiled a ‘synthesis’ report pulling together all these findings, saying the goals should probably be a bit fewer in number but that the 17 outlined by the group should form the basis of negotiations this year.

It’s very exciting to see a draft gender goal which, for the first time ever, really recognises the specific barriers women face in achieving economic empowerment. The draft goal urges states to “undertake reforms to give women equal rights to economic resources, ownership and control over land, other property, financial services and inheritance”. There is reference to the need for sexual and reproductive rights, equal participation in political and economic spheres, and even a mention of the need to recognise and value unpaid care carried out by women.

So, how do we ensure that as the negotiations and horse-trading in the world of realpolitik begin, we do not lose the important references to financial inclusion, the stand-alone goal on gender equality, and crucially the recognition of the strong relationship between the two?

Reasons to be optimistic

The main reasons governments are already struggling to agree on the goals are because they face the following challenges: (1) the cost of realising the SDGs; (2) the ability of the UN and individual states to monitor and measure their implementation; and (3) how to find a role for non- government actors like the private sector in funding and delivering the goals.

But I think there are three main reasons to be optimistic.

In the past the MDGs were largely funded through OECD governments’ official Overseas Development Budgets (they are all committed to ensuring 0.7% of their GNI is spent on overseas aid, but only six countries have achieved this and the global economic recession is seeing aid budgets fall not grow). This time round, many ‘least developed countries’ are now ‘middle income countries’ and have faster growing GDPs than northern governments, so they will be asked to improve domestic resource mobilisation and taxation to fund social development.

We need to convince governments that not only does women’s access to finance benefit them, their families and the wider community (access to secure savings and loans helps families withstand shocks – illness, droughts, falls in income; to invest in the future – for example, paying school or health fees; and to work their way out of poverty – such as setting up new businesses, or expanding existing ones) – but it also helps grow domestic resource bases.

CARE and Barclays have estimated that if all the 2.5bn unbanked were brought into savings-led formal finance it could create $145bn per annum into the global economy. So, financial inclusion both helps ensure ‘no one is left behind’ and supports wider macro-economic growth.

States are concerned that some of the proposed 169 indicators simply can’t be measured. And if they can’t be measured they shouldn’t be included as it will be difficult to track progress against the new SDGs and make comparisons across countries. Yet, financial inclusion (and sex-disaggregated data on financial inclusion) is certainly measurable. Already a wide variety of systems are in place to measure people’s access and these could be adopted straight away. They include the World Bank’s ‘findex’ database report as well as MIX market and Savix.

Governments and the private sector are scratching their heads about how the latter should play a role in development given their absence back in 2000. Yet, there is perhaps no better issue than access to financial services that illustrates how the private sector, governments and NGOs can work together to close the gap and reach the 2.5bn unbanked.

Already multi-stakeholder partnerships are providing opportunities to bank the very poorest, through using mobile technology, group accounts and other innovative business models. And as Women’s World Banking are showing, women are overwhelmingly the better customers (in terms of repayment rates, customer loyalty and adopting a range of products).

But there is still a need to reduce costs and reach more people. A global commitment by banks and mobile companies to universal access to finance could be a show stopper.

Finally, governments need to recognise that access to finance really is a ‘magic ingredient’, because it is an ‘enabler’ of all the other goals. Access to finance is not a goal in itself, it is a means to end poverty and economically empower women – a means to pay for education and health, a means to help grow enterprises and create jobs, a means to tackle youth unemployment.

Once they understand this, including access to financial services, particularly for women, has got to be a no-brainer!

More in this category: « From Bad to Extreme – the deteriorating situation for women and girls in South Sudan's war Women’s empowerment in the hospitality and tourism sector »