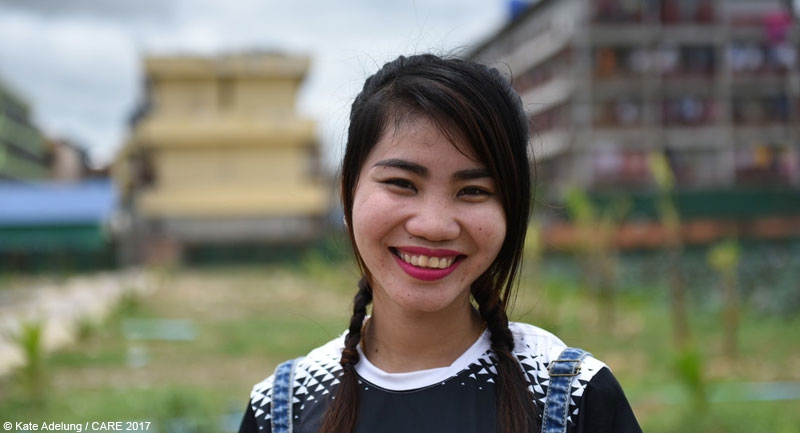 CARE is adamant that the #MeToo movement should not go down in history as a flash in the pan, but that we must harness the moment to make it a significant milestone on the path towards gender equality. The agreement at the International Labour Conference (ILC) to establish a new, legally binding convention to ensure that abuse and harassment isn’t part of anyone’s job description, anywhere in the world, is a big step forward. We now have one year to ensure that this draft agreement is as strong as possible before the final vote next June.

1. We mobilised supporters across the world – 125,000 people, from the UK to Ecuador, signed petitions and we were able to deliver them to various governments in advance of them attending the conference, so they knew that the public were watching them.

2. We lobbied to get the Convention on various international radars ahead of the ILC – that included support from the G7 Employment Ministers (thanks to CARE Canada efforts) and reference to the Convention in the Commonwealth Heads of Government women’s forum statement. (We like to think Helen Pankhurst’s speech to the Commonwealth had a minor role in helping with this!)

3. We engaged with business– securing public support from the UK Fashion and Textile Association and also some individual companies that are keen to work with us to identify how they can tackle the issue across their supply chain. The B-Team also rallied support from Unilever, Safaricom GSMA and more to come out with a positive statement at the ILC.

4. We used our global network of CARE offices to lobby governments with our positions. We already know that CARE efforts helped sway the Australian government to support a Convention not a recommendation; that the Pakistan delegation were fully briefed by CARE; and we have seen the negotiation commentary which showed how the UK government pushed our concerns about supply chains.

5. We engaged with allies to promote women’s voices – including the fabulous Lenny Quiroz, the General Secretary of the Domestic Workers Union of Ecuador, and Anna Lee Fos Tuvera, from the International Trade Union Confederation Asia/Pacific. Thier experiences and examples helped bring a room of civil servants in an airless room back to reality. And we raised the voices of activists including the powerful rallying cries of Bangladeshi garment worker turned union leader, Nazma Aktar at #March4Women.

In many ways the hard work is still ahead during the next round of government consultations and revisions to the draft text. There will be bust-ups about definitions – namely workplaces and workers…

We know that many governments and particularly business are very concerned about the current wide definition of a workplace, with the UK employers association, the CBI, dismissively describing ‘the world of work’ as a ‘loosely defined slogan’. They worry that these definitions are poorly defined and unclear and will not help business know exactly who, where and what their employers need to be protected from.

For CARE and the trade unions the wide definitions are absolutely critical. It may appear to many that if there is a Convention that addresses the issue in fairly ‘formal’ workplaces, then we will have dealt with the problem. However, in many countries around the world only a tiny proportion of the workforce actually work in such ‘formal’ workplaces: in India for instance, over 80% of women workers are in the informal sector and in Nepal this figure is over 95%.

And indeed, in the UK and many other countries, an increasing number of workers are self-employed. The lack of traditional ‘workplace’ cannot be used as an excuse to avoid responsibility for women being harassed, by their de facto employers.

Secondly, women who work in sectors that are client- or customer-focused can be faced with significant sexual harassment as we have seen with the President’s Club Scandal. These forms of third party harassment are not currently covered by UK law following the government’s decision to repeal Section 40 of the Equality Act 2010. The Convention would therefore also help strengthen gaps in UK law for those in sectors that are particularly vulnerable to harassment.

There is no doubt that the voice of business is vital in the ILO tri-partite decision making body. Their influence is not just in the negotiating room but also powerfully used to lobby national governments in advance of such meetings.

We need to identify allies we can work with to shift mindsets and ensure business is on the right side of history. CARE is planning webexes, meetings, a session at the Business Fights Poverty annual gathering in Oxford, and more with our corporate partners. We know the evidence is growing in terms of the costs of not acting. For example CARE research showed harassment in Cambodia directly leads to lower productivity, revenue loss, and missed days of work, costing the industry US$89m a year – that gets added to the costs of goods that end up in the shops.

3. Keeping up momentum and joining forces with others

No campaigns are won in a year, they take many more – particularly until policy changes result in actual improvements to people’s lives.

The unions have been rightly pressing this issue for years to even get it on the ILO agenda. We will all have to work hard to keep our organisational priorities focused on the issue – there are always competing demands. And it’s always challenging to keep supporters with us on the long journey of international negotiations.

So we will need to get creative, work with usual and unusual suspects and keep this issue front and centre in the minds of governments and business. And we will need more champions like UK MP Maria Miller – who led a parliamentary debate and keeps in touch regularly with ideas and suggestions on how to keep up the pressure.

We will also need to engage with departments across government – including development and foreign ministries – in addition to the Labour Ministries we have been talking to. Many in these departments will rightly see how this convention will help to meet SDG targets on decent work and women’s economic empowerment.

The stakes are high. A failure to secure what has been started at the ILO would be a further injustice to all the women and girls suffering abuse and violence at work on a daily basis to make the food we eat, the clothes we wear and the gadgets we all can’t live without.

More in this category: « 5 Minute Inspiration: How does a savings account promote men's engagement? How to maintain your enthusiasm for the Grand Bargain (yes, really!) »