Home // Development Blog // What happens next? – An initial assessment of the Global Summit to End Sexual Violence

What happens next? – An initial assessment of the Global Summit to End Sexual Violence 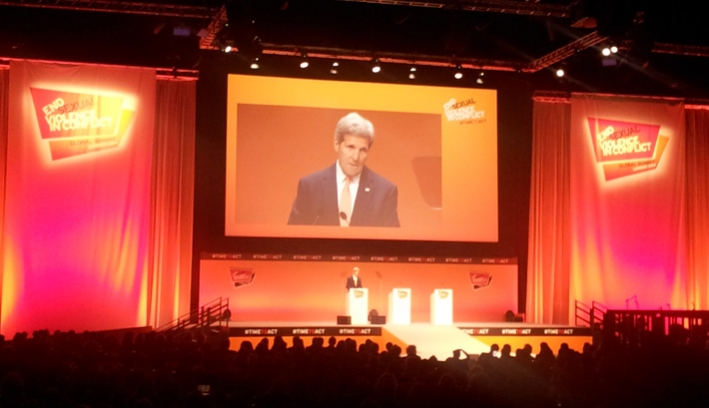 Four days; over 120 states represented at senior levels from ministries of foreign affairs, defence, gender, education, justice and health; over 1,000 civil society activists; unscheduled demos from neglected conflicts and the movement against deportation of rape survivors; movie stars; the mad, the bad, the good (and yes, some of the insane) – this summit was an unprecedented exercise in international events addressing a global policy issue.

It was innovative in its format and method. The level of interactivity and informality permitted people to meet and talk in ways that I’ve not witnessed before in my experience of global summits (which stretches back, I’m somewhat embarrassed to admit, to the Kyoto Protocol Climate Change COP in 1999). Representatives of grassroots activists had the last word in roundtables with foreign ministers and the chiefs of militaries.

While some of both the fringe and policy-maker events were staid, platitudinous and mired in endless speechifying, a surprisingly high percentage featured strong and substantive debate and were facilitated in a deliberate way to feed clear recommendations into the Ministerial sessions.

The informal structure allowed for a lot of unexpected, unplanned but important conversations to happen. I personally saw the ministers of two states at war, with a formal peace process moribund at present, sitting together talking in a relaxed and intimate fashion which could never happen if and when they meet at a negotiating table. We may never know if and how these myriad encounters translate into differences in countries affected by war.

So what to make of it all?

I sit now in the closing session. Videos of various ministers play featuring pledges some passionate and generous and some vacuous and insubstantial; some evidently backed up with resources and political will, some awkwardly weak – the political talking head clearly nonplussed by the task, perhaps craving a coffee and conscious that they haven’t come with any significant commitments to make and looking forward to it being over.

The British Foreign Office knew they didn’t want or need another joint declaration. That was what the G8 and UN General Assembly declarations on preventing sexual violence served up. This summit was always supposed to be a stocktake and to catalyse national and regional actions to implement the existing global commitments.

New country strategies on tackling gender violence have been presented and new funds, some impressive, some less, have been launched. The test now obviously resides in whether we start to see these make changes in the lives of ordinary people at the frontline of conflict.

Will donors change the way they make decisions in diplomacy in warzones and allocate funding to better prevent and respond to sexual violence?

Will states and armed groups in the countries affected by these horrors be held accountable for their actions?

Will NGOs step up their game on this too?

As John Kerry addresses this assembled crowd of the powerful, the survivors, the activists and the rest, these are the questions that play on my mind and I would guess others too. Indeed as Kerry just put it: what do we do when we leave here?

More in this category: « Technology as a poverty game changer: Using citizen-generated data to measure the SDGs SDGs are meant for poor people: let’s get them to say if they work! »