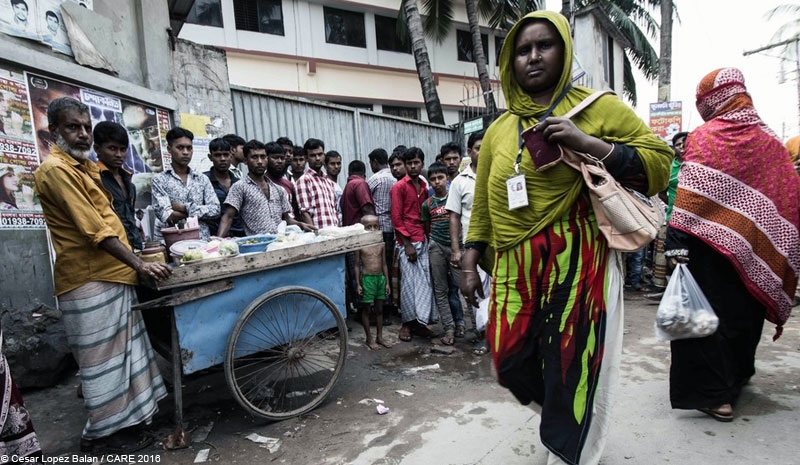 Ruksana Begum, a garment worker in Bangladesh, on her way to the factory

Saturday 7 October is World Day for Decent Work, an annual event sponsored by the International Trade Union Confederation (ITUC) to bring global attention to issues faced by workers. This year, the ITUC’s focus is on Corporate Greed, but CARE is maintaining its focus on tackling violence and harassment in the workplace. While we agree with the ITUC’s demand for decent wages this World Day for Decent Work, we believe that pushing for greater regulation of workplace violence is a key enabler for women to achieve all the elements of the Decent Work agenda, such as on wages.

We recognise the central role of violence and harassment in the workplace in continuing oppressive working conditions, in diminishing women’s voices, and in breaching women’s rights, and we are committed to supporting women to fight it. For instance, recent CARE research in Cambodia showed that sexual harassment is a regular occurrence: “nearly one in three women garment factory workers report experiencing sexually harassing behaviours in the workplace over the last 12 months”. This sexually harassing behaviour is often tied to bullying by supervisors across a range of work issues: excessive overtime, low pay, lack of benefits.

Power differences as well as stigma and vulnerability associated with certain types of work, in addition to a repetitive and high-pressure work setting based on meeting production targets, have all been identified as factors that lead to a hostile work environment. Violence and harassment remain a largely hidden issue. They rarely appear on ethical audit reports and data on prevalence and impact is fractured. It is also often low on the priority list of brands and employers – as it is not considered a core labour rights issue – and trade unions often fail to prioritise it, despite the largely female workforce in many industries.

So we are taking the opportunity of World Day for Decent Work this year to continue to promote support for the ILO Convention on Ending violence and harassment against women and men in the world of work. We recently submitted our detailed response to the ILO’s Questionnaire on the new Convention, and we will be working hard between now and the International Labour Conference next June to build more support for the Convention across governments, business and trade unions in the global South and in the global North.

We ask everyone interested in women’s rights and in workers’ rights to support the ILO Convention – check out the ITUC Campaign, keep up to date with what’s happening via Insights, and ask your own organisation what it is doing to support the Campaign.

More in this category: « Avoiding the data trap blog 3: An ancient monk’s solution for confidence International aid and the Conservatives: What did we learn at the Party Conference? »