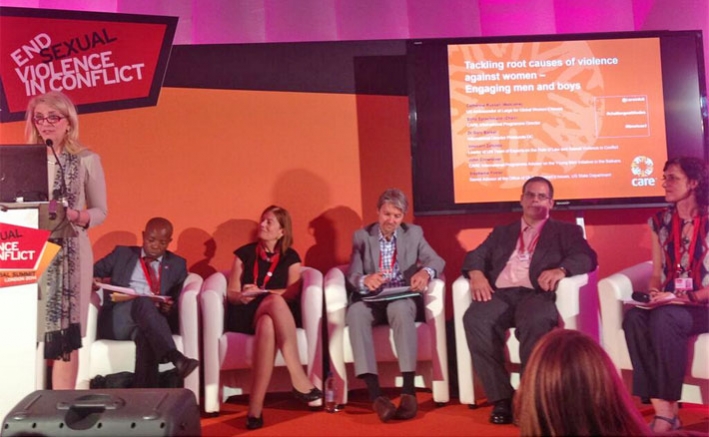 Panellists at the 'Tackling root causes of violence' event © CARE

CARE’s discussion event at the Global Summit to End Sexual Violence in Conflict asked panellists to share their experience on what works in engaging men and boys – and what are their practical recommendations for scaling up this work and finding tangible global solutions to the problem of sexual and gender-based violence.

How can we create change at scale? – Three key recommendations

Prevent violence at its source

Introducing the discussion, Sofia Sprechmann, CARE International’s Head of Programmes, said that while the focus of the Summit is on impunity, we should aim not only to reach that but avoid violence taking place in the first place. That means addressing the deep roots in society and requires social change work at the deepest level – and that can’t be done without engaging men and boys.

Innocent Zahinda, leader of the UN Team of Experts on the Rule of Law and Sexual Violence in Conflict, said “accountability, investigations, prosecutions” are very important – but are “often very expensive, and often too late... when the damage has been caused, when sometimes the victim has actually died.” This huge human and financial cost can be avoided by engaging men and boys to prevent sexual violence from happening in the first place.

Dr Gary Barker, International Director of Promundo-DC, spoke of breaking the silence around the transmission of violence from one generation to the next. “Between 1 in 5 to half of boys will witness violence against their mother when growing up. We also know that boys who witness this are traumatised by it. The problem is that there is silence around this cycle.”

Innocent Zahinda spoke of the silence around male victims and survivors of sexual violence: “There are tens of thousands of silent victims in the DRC and northern Uganda. Male victims miss out on services, because this issue is actually invisible.”

In her Welcome address, Catherine Russell, US Ambassador at Large for Global Women’s Issues, said the gender norms that enable violence are met with silence and tolerated by men: “As fathers, husbands, brothers, friends, community leaders, men have a role to play in speaking out and tackling the problem. In places like Rwanda, men and boys are showing they can be partners in protection and violence prevention. In many instances men are the gatekeepers in communities so they have an incredible opportunity to change attitudes.”

To achieve that, said Gary Barker, we need to challenge the attitudes behind the way we think and talk about masculinity. “Homophobia, power, privilege: these need to be front and centre,” he said. “We know that one of the biggest policing mechanisms for the behaviours of boys and men is homophobia. ‘If you don’t act like this, you are...’ – and fill in the blank. Most of those have to do with ‘You’re not a man’ meaning ‘You’re not straight’. We need to be really careful how we unpack the language, that we question it, that we look at how it’s used.”

“How do we look at the smaller violences as well as the bigger ones, and be part of a community that says it’s not OK?” asked Gary Barker. “Masculinity is good at putting us in a box and saying keep quiet about it. In fact the majority don’t want to use violence, so what can we collectively do to call the appropriate help out?”

The answer is to challenge the culture of impunity “so that the two-thirds of us who don’t use violence speak out when we do see it”. That means not only “making new meanings of manhood and finding those existing versions that preach non-violence and equality” but also acknowledging that we are reinforcing harmful norms by not standing up to them. This is not just one person’s responsibility but everybody’s – an “everyday responsibility”.

Get it on the curriculum

John Crownover, CARE’s Programme Advisor on the Young Men Initiative in the Balkans, said teaching masculinities in schools could “change the rules about how a typical man should be in the community” and “recognise the diversity and the variety of different masculinities”.

Secondary schools provide an entry point to start talking about sexuality at a time when young men are developing their identity and having their first relationships. Despite resistance from some elements of society – such as, for example, from religious communities when this work was put on the national curriculum in Croatia – we still need to push ahead because of the clear, positive outcomes of this approach. He said: “We can see a large social impact if we are start this work from primary school and secondary school.”

Connecting with men and boys

If men and boys are to be agents of change, first we need to connect with them in a way they will understand, said Innocent Zahinda: “In Sri Lanka I will use cricket, in the UK and Brazil I will use football...” Engaging with men and boys means looking for the right entry points. For example, in Africa this might be through the customary systems: “In rural areas men are in charge and are discriminating against women. It’s the clan leader who adjudicates disputes; his son will take over from him. So let’s engage through the customary justice systems, so if men are in charge of their community they can ensure that both women and men are actually protected from sexual violence.”

Fatherhood is also a good entry point to address male attitudes to women and violence, said Gary Barker. In Brazil, there is a prenatal health protocol for women, so why not have one for men? Men are invited to talk about the added pressure of being a father and providing for a family, and “included in that we do violence screening”. He said: “In as many as 1 in 5 cases violence happens during pregnancy, so it is a moment to screen – this is a moment we can reach men, offering HIV testing, add a few questions to our protocol and talk about violence…”

John Crownover spoke about the importance of working with peer leaders – young men in their early 20s who can be role models “instead of reinforcing some of the gender norms that we are trying to challenge”. These young adult leaders “need to go through a process of their own personal development and reflection, engaging and challenging them rather than reinforcing norms”.

Stephenie Foster, Senior Advisor at the Office of Global Women’s Issues in the US State Department, said it is critically important that at the high policy level, men are talking about this issue: “We need more diverse voices at this level – not only for women leaders but male leaders, for policy makers at national and local levels across the board, to take this on.”

Innocent Zahinda gave the example of a high profile football manager whose team were not doing well and who “said his players were playing like girls". Zahinda said: "This  means this issue is quite deep, even in a society like the UK where awareness about this issue is very important.” Stephenie Foster agreed that we need to challenge public figures who talk in this way, in order to “create the environment in which we can do this work”.

As well as its recommendations for strategies that can be used globally to scale up work with men and boys and achieve real impact, the session raised some challenges:

Read more about the participants in the panel discussion.

More in this category: « From #REFUGEESWELCOME to the World Humanitarian Summit: CARE panel discussion Technology as a poverty game changer: Using citizen-generated data to measure the SDGs »