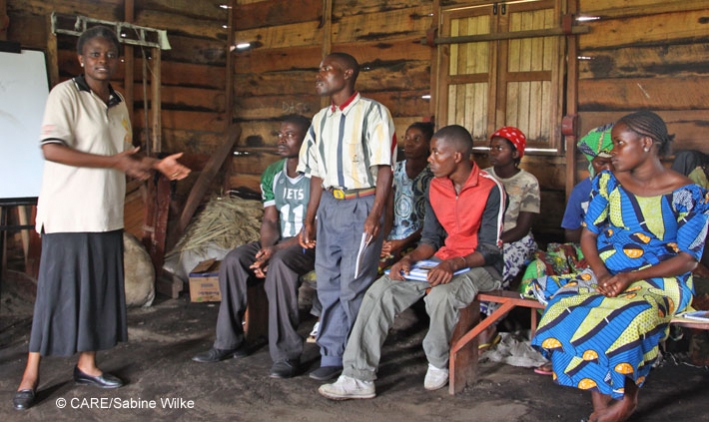 Over recent years, the Democratic Republic of Congo has been a kind of laboratory for different initiatives to tackle impunity for war rape. Last year, the UK Foreign Secretary William Hague and Angelina Jolie visited the DRC and CARE’s projects for survivors of sexual violence in North Kivu province. What are the key lessons that CARE’s Country Director in the DRC, Yawo Douvon, hopes they will take to the Global Summit on ending sexual violence?

I travelled with William Hague and Angelina Jolie to Lac Vert camp where CARE works to provide basic assistance for people who had fled the fighting. We met and spoke with survivors of sexual violence and it was evident that both Hague and Jolie were moved by what they heard and saw. A year on, Mr Hague has invited over 140 governments from around the world to what he has promised will be “the largest ever” summit on sexual violence in conflict. The focus of the summit is on tackling impunity. In this blog, I share some thoughts on lessons learned in the DRC. Political engagement here and elsewhere is welcome, but prosecutions alone will not be enough to end sexual violence.

What are the key initiatives?

Did these initiatives work?

In theory, these initiatives should have made the international and national efforts to tackle impunity more effective. In practice, the experience has been more messy and complex, with important lessons for decisions to be made at the Global Summit.

Making warzone rape a major focus of the UN’s strategy to promote ‘stability’ in the DRC meant that UN coordination on sexual violence became centred in the International Security and Stabilisation Support Strategy in support of the DRC government’s Stabilisation and Reconstruction strategy, which focuses on directing ‘stabilisation’ projects to areas deemed cleared of anti-government militias. As a consequence, some have argued that support for the humanitarian response to gender violence outside the ‘zones of stability’ was compromised.

Furthermore, all the political attention on rape as a tactic of war has distracted from a broader investment in ensuring that emergency projects respond to other forms of gender violence or the different needs of women and girls, men and boys. Indeed, the UN’s own system to assess how well projects address gender suggests that over 50% of humanitarian projects in the DRC are effectively ‘gender-blind’.

Following the arrest of Mayele, there were further rounds of violence in the Walikale region. The push for justice had not brought commensurate efforts to provide protection at the local level for the survivors that came forward or their wider community. It was only at a later stage that MONUSCO increased its presence in the Walikale region, and implemented more effective approaches to protecting civilians (eg increasing its number of forward operating bases and implementing night patrols). While an internal UN lessons learned document was reportedly prepared on this experience, it never saw the light of day.

Typically, donors fund mobile courts to deploy to a location for a two-week period. However, this funding does not provide for new or additional justice capacity on the ground. Rather, it involves taking the existing local justice institutions and staff away from their normal duties. The city of Goma, for example, has just one judge; the court in Bukavu was not in Bukavu for three months in 2012 as it was continuously deployed on mobile court duties. Furthermore, the mobile courts are then under pressure to deliver in a short timeframe. This risks compromising due process in the pressure to secure prosecutions. Research by Wageningen university in 2012 suggested that around 50% of the convictions by mobile courts that they reviewed were based on insufficient evidence.

So what can we learn?

No easy solutions – but let’s learn from experience

Of course, we cannot pretend that there are any easy solutions for sexual violence in the DRC. Deeply engrained norms regarding women’s subordinate place in the home and society mean that progress is slow. Women are still often seen as ‘assets’ of the husband. Stigma against survivors, rather than perpetrators persists. The low level of education and livelihoods opportunities available to women also represent obstacles to their efforts to gain a voice in community matters, including on GBV. Furthermore, long distances to formal courts and the high likelihood of GBV cases collapsing or resulting in no reparation for the survivor also undermine efforts to prosecute GBV crimes.

But while there is no single, easy fix, there are lessons from the DRC that must be heeded at the Global Summit in London. Mr Hague, Ms Jolie and the other world leaders gathered there need to commit to treat root causes of the violence, not just its symptoms; put survivor safety first; and invest in frontline humanitarian assistance. Will they listen?

Yawo Douvon is CARE's Country Director in the Democratic Republic of Congo (DRC). He has 22 years' experience with CARE both in development and humanitarian work. He has spent the past 10 years working in post-conflict situations in Burundi and the DRC, particularly in sustainable development and women's empowerment programming.

More in this category: « The best of 2014: Inclusive business priorities for the new year How citizen monitoring could make the SDGs really deliver for poor people »